An Introduction to Virtual Reality

Virtual Reality. Is it just another fad? Why would someone want to wear a bulky, unattractive headset while falling over their living room furniture? Great Question. Well, it’s simply hard to grasp the “game changing” experience VR can deliver unless you have personally tightened that headset around your head and fully immersed yourself into a virtual world.

The world of virtual reality has had a rough history. In the late 80’s, the idea of a utopian VR universe emerged alongside the explosion of the personal computer but proved to be fruitless. The power required to create a fully immersive virtual experience was not tangible at this time which led to virtual experiences lacking the true immersion that tricks your brain into thinking you are in another universe.

Many enthusiasts held onto this idea of virtual reality into the mid 90’s until the entire industry faded away. There was a much bigger more attractive technology set to pave the way of the future at this time: the internet.

Throughout the 90’s and into the early 2010’s, the idea of a virtual universe had essentially faded away, until Palmer Lucky founded his notorious startup, Oculus. The company then started a Kickstarter campaign to raise funds for this idea, which then led to nearly 2.5 million dollars being raised for the development of their flagship product, the Oculus Rift.

Over the next few years, Oculus was the household name in the world of virtual reality, which eventually lead to Facebook purchasing Oculus for 2 billion in 2014. This was a landmark moment in the virtual reality industry and was the starting point for companies to win the race to virtual reality market domination.

For years, I was a supporter of the Oculus Rift after having the opportunity to demo the product. Recently, however, I happened to make my way into a computer store where a demo was set up for the HTC Vive. The Vive was created by HTC, who has been largely known as a smartphone manufacturer, in partnership with Valve Corporation. I had some time to spare, so I decided to sign up and try it out.

The Vive had recently been growing in popularity. It was fairly similar to the Rift in every way, except for one very important feature: room scale. Room scale takes full immersion into the virtual world one step further, allowing the user to physically walk around in their universe, instead of just standing or sitting in place while looking around.

It was time for my turn. The headset was secured to my face. The controllers were secured to my wrists, and within a few moments, I was deep in the ocean standing on the deck of a sunken ship as fish and other sea life swam around me. Then, a huge realistic humpback whale decided to say hello.

I completely forgot the fact that there was a small crowd gathered around me watching my every move through an external monitor.

A few minutes later, I was on a launch pad with two futuristic laser pistols blasting away at drones trying to vaporize me. The demo seemed to last merely a couple minutes, but I was fully immersed in this universe for 15 minutes and it was over all too quickly.

Although I had been a very vocal supporter for Oculus over the past few years, the ability to move around my environment was a real game changer. I was sold on the HTC Vive. Two weeks later, I was walking out of the store with the HTC Vive box in my hands and not an ounce of buyer’s remorse. I was overly excited for the ability to play some of these fully immersive games, to watch Netflix inside a virtual movie theater, and as someone who works in marketing and advertising, I was extremely interested in the marketing potential of this new technology.

A few weeks later, I brought the entire Vive setup to the Square 205 office to give the team a little demo of their own. Out of the entire office, only one of our designers had experienced virtual reality before, so I knew they were in for a treat. I tried to mimic the same demos I was given when I experienced the Vive for the first time. Since we are a creative agency, I had to let a few of the designers have some fun with Google Tilt Brush, but everyone had the opportunity to try different games and apps for a full experience. 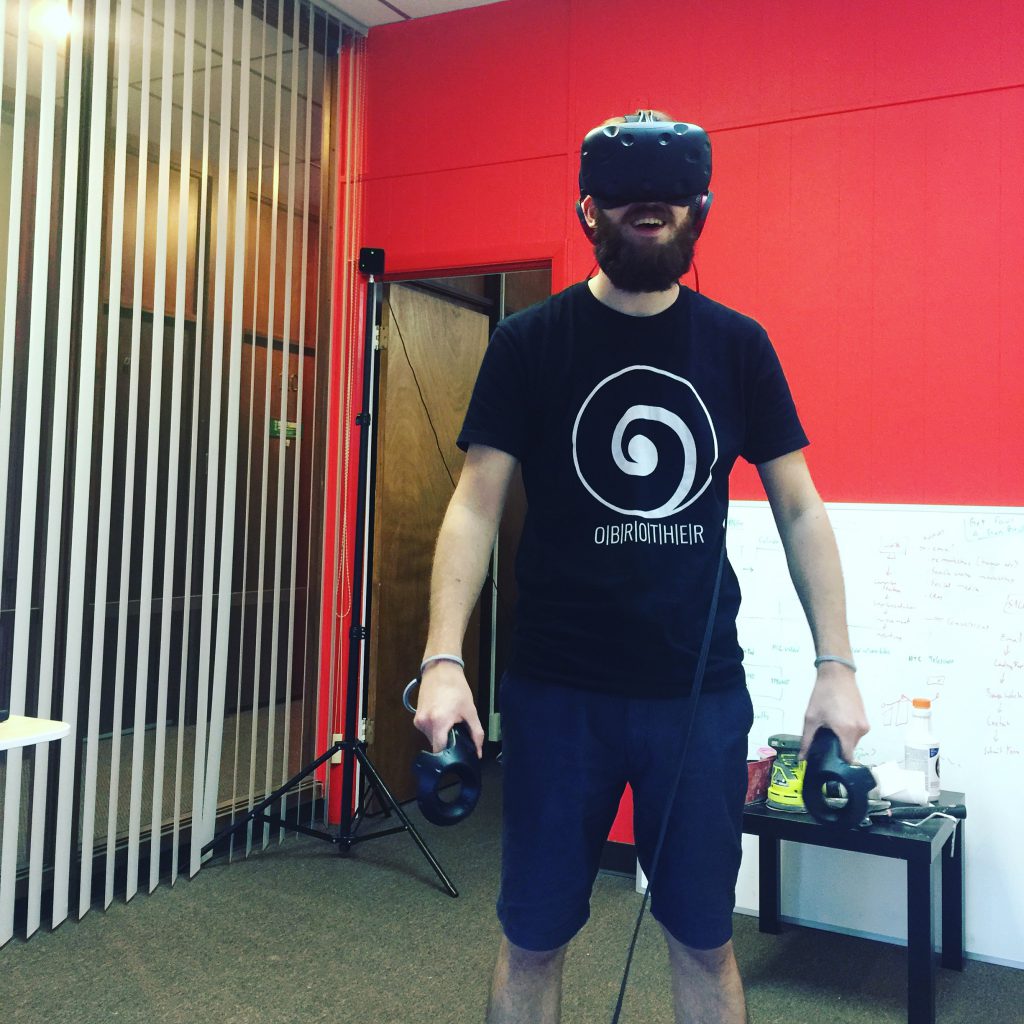 Virtual Reality In the Marketing World

The marketing world has had to adapt to constantly changing technology from smartphones, smartwatches, and new advertising mediums online. With the growing popularity of virtual reality, though, a completely new medium has come into play with an absolutely immense amount of potential.

Companies have already started exploring the ways to expose their services and products to consumers in the virtual world. IKEA was one of the first companies to develop a polished virtual reality app for their product, allowing consumers to explore a virtual kitchen and view their products in different colors.

While the experience is only limited to kitchens at this point, there is also potential for IKEA to develop a fully immersive room planning experience allowing the consumer to create their own living room in a virtual space to their exact dimensions. This would allow the consumer to see and experience their virtual room designed with furnishings of their choice before buying.

Companies such as Volvo, McDonalds, and Marriott have developed polished virtual experiences that can provide consumers with more than just a simple banner ad or web video which in turn gives the consumer more incentive to choose their products or services. Michelle Obama has also developed a virtual video incorporating animation elements to keep the viewer actively involved in what is being said.

There is also the idea of virtual reality-based websites, allowing the user to experience the UI of a website in an entirely new way.

VR to the Future

While this stage of Virtual Reality is still in its infancy, the industry is expected to grow into a multi-billion dollar industry by 2020. Advertisers and marketers have barely even scratched the surface of the potential in this medium, but it is fairly certain that the coming years will bring us experiences that have never been imagined, and that have not been possible until now.

Here at Square 205, we’re always looking for new cutting edge technologies and digital marketing platforms. As virtual reality matures, you can bet we’ll be taking advantage of the technology to create new experiences there.